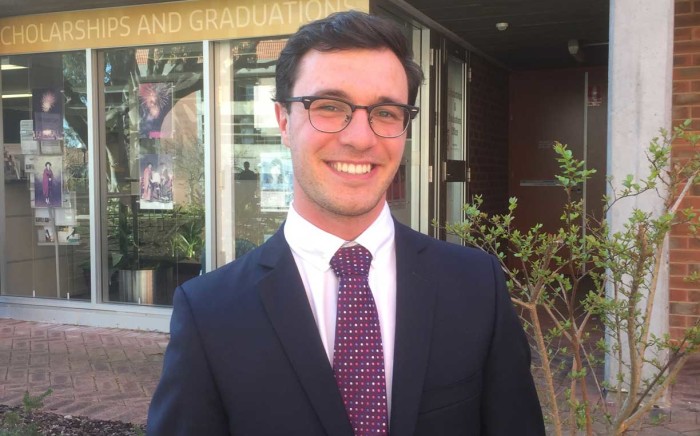 The moment Robert Ferritto found out he was awarded one of the world’s most prestigious scholarships, during his second stage interview, he was told he couldn’t tell any of his fellow contenders. As the second student from Curtin University to be awarded a Rhodes Scholarship to study at the University of Oxford, Rob tells us he had to pull off the world’s best poker-face when he returned to the silent waiting room and sat alongside his competitors.

He didn’t have to hold his composure for long; it was announced last week that Rob would be heading off in 2018 to study a Master of Philosophy in Water Science, Policy and Management. With dreams to provide universal access to clean water and sanitation, Rob’s goals may soon become a reality.

“It was a surreal feeling – I didn’t really know what to say.”

The Rhodes Scholarship, to allow postgrads to study at the University of Oxford, was established in 1903 by Cecil John Rhodes; with the intention of creating a community of global leaders, who can develop networks to help each other “fight the world’s fight.”

Genuine and honest, Robert confesses that he didn’t think he had a good chance of being successful with his application.

“The Rhodes [Scholarship] has an elite element to it – but I didn’t think there was any harm in putting my application forward anyway.”

He says the application process was pretty simple, but required a lot of effort in writing a detailed personal statement about why he wanted to attend the University of Oxford. He also needed to source six supporting letters of recommendation to submit along with his resume. But, with an extensive list of volunteer experience, community involvement, professional industry work, sporting achievements – and he even co-founded a not-for-profit – it’s no wonder he was selected.

With the Scholarship seeking to award “those who possess energy, courage and commitment to positively impact the world” – we can understand how Robert fits this profile. He talks candidly about how he discovered his drive and passion for wanting to help people during visits to the Solomon Islands, Vietnam and Cambodia.

“These experiences gave me perspective on my life. The only reason I’m in the position I’m in is because I was born into it. There were people there who were just as talented, or more so. Why should the roll of a dice determine the circumstances of these people? That’s something I want to try change.”

He discovered his interest in finding solutions to world water issues whilst talking to a mentor when he engaged with the Next Step Mentoring Program at Curtin. He really encouraged Robert to figure out how to make an impact and solve these problems.

“I really want to work with water and at this point it’s a big problem. I’d like to work in trans – boundary water issues – which is when a water source is on the border of a few countries but the people are fighting over it. This isn’t something we experience in Australia.”

Robert tells us he can’t understand why people complain about companies like the Water Corporation – which provide us with daily access to clean water – stating that we take these things for granted and should look at it from a different perspective.

“I recently met a woman who visited developing countries and met communities who didn’t have access to water – so the kids and women had to travel to crocodile infested rivers to collect water.”

Besides the ultimate cool factor of studying at one of the world’s top Universities, Rob is most excited to have his views challenged; which might seem crazy to those of us who are headstrong.

“I can’t think of a better place for it. What I’ve found is, with things like Facebook or YouTube’s algorithms, [they] just enforce your views rather than challenge them; you don’t get to see both sides of the story.”

For those seeking to tread a similar path to Rob he says “go for it – just give it a crack”. He believes if you see an issue, don’t wait for someone else to solve it. And, if you’re afraid of failing, he says the best way to go about it is to fail fast.

“Don’t spend weeks, months or years trying to get something perfect – because it won’t be. Get out there as soon as you can and find ways to improve, and work on that.”

We spoke with Robert earlier in the year prior to his application for the Rhodes Scholarship. He talks here about his co-curricular and extra-curricular engagement at Uni and his connection with the John Curtin Leadership Academy (JCLA).

Why you need a mentor