Resilience with a reason 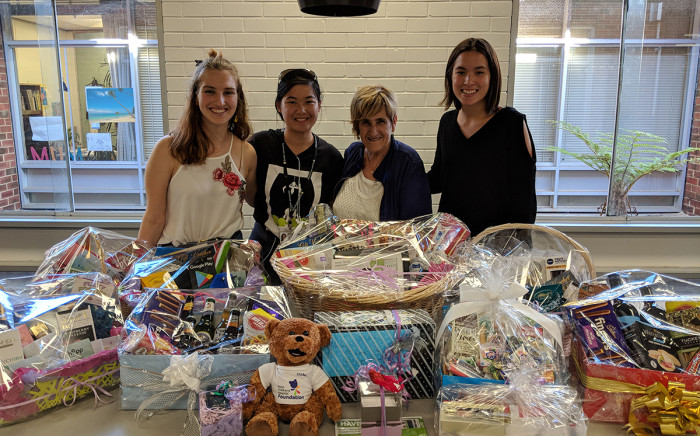 If you were on Bentley campus on Thursday a fortnight ago, you may have noticed some very enthusiastic raffle ticket sellers raising money for Perth Children’s Hospital Foundation. What you probably didn’t notice was the effort, rejection and subsequent resilience that goes into running these and other charity events.

Kira Molloy, Christina Lau and Bec Weldon (pictured above with Maureen Meredith) are three members of Curtin Community Projects (CCP), and the organisers of this most recent fundraiser.  We spoke to them about the highs and lows of good old-fashioned door knocking and cold calling for donations – and their thoughts may keep you going while you are out there trying to organise your own event or looking for a work experience placement or job.

Let’s get the good news out of the way first! 13 companies generously donated items towards the Mother’s Day hampers. Between raffle tickets and donations, $2103 was raised for Perth Children’s Hospital Foundation.

And the not so good news… Kira, Christina and Bec spoke to between 130 – 150 companies, with reactions ranging from slightly awkward to downright rude.

So how did they deal with all this rejection?

They all agreed that it is important to focus on the positives. You don’t know whether the next business you approach will say yes or no, so you just keep on going and focus on the reason you are doing it – in this case, for the sick children that would benefit from the money they were raising.

For the four or five companies that were dismissive, there was one company that was enthusiastic and caring and that was really gratifying.

One of the best responses was from Hopp Footwear, who donated vouchers plus 27 pairs of Crocs that were donated directly to Perth Children’s Hospital for the kids to use straight away.

So the lesson? If you believe in what you are doing, keep getting back up and trying again. The victory will be all the sweeter!

Resilience – it’s all in your mind