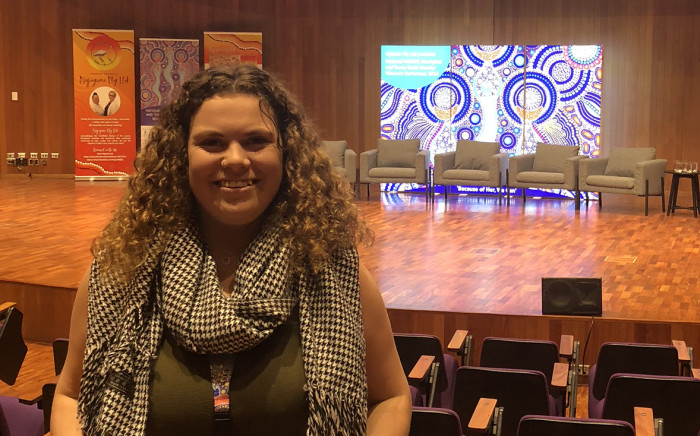 Kaya! My name is Nova Garnier, and I grew up in the Nyungar community of Narrogin but have heritage ties to the Torres Strait. I am the coordinator of the Aboriginal Student Placement Program here at Curtin University and am currently studying Human Resources.

Growing up in a small country town was challenging, given the distance from my Queensland family and the social impact of my father going ‘walk-about’. Trying to fit in to the Nyungar community where my family are not from made me feel like I never really belonged anywhere. However, I have always felt the pull of Aboriginal philosophy and culture, and the need to be connected. It was not until I came to Curtin, where I truly felt accepted for who I am, that I really began to learn about and embrace my Aboriginal and Torres Strait Islander heritage.

National NAIDOC Women’s Conference
On 11-12 July 2018 I had the privilege of attending the first National NAIDOC Aboriginal and Torres Strait Islander Women’s Conference in Sydney. The first day was only open to Aboriginal and Torres Strait Islander women, with a total of 500 delegates. The second day was open to all women and had a total of 650 delegates.

To be in a room surrounded by 500 strong Aboriginal and Torres Strait Islander women with such generational diversity, who had travelled from around Australia, was so empowering! The spirit within me resonated with the energy in the room, and I felt this deep connection and sense of belonging to my people and my land.

All of the women who spoke were very inspirational, including Dr Jackie Huggins, Linda Burney MP, Tanyah Nasir, Kerrie Tim and many more. Hearing their stories made me feel proud to be Indigenous. With the theme of NAIDOC 2018 being ‘Because of her, we can‘, the keynote speakers spoke about their mothers and grandmothers, the positive influences they have had on their lives, and how that helped shape the women they are today.

There was a variety of workshops delegates could nominate to attend. One of the workshops I attended was run by Marissa Verma, the founder of Bindi Bindi Dreaming. Aunty Marissa did a healing with ochre, a mix of natural pigments and minerals used for cultural expression. We then went on to participate in cultural dancing.

A lasting impression
The workshop that had the biggest impact on me was run by Aunty Rhonda Collard-Spratt. She spoke about her autobiography Alice’s Daughter, and explained what it was like growing up on the Carnarvon Mission, how she taught herself love, and how to heal through art and music. Held on the second day and open to everyone there was about 25 women in the room.

At the end of the workshop, Aunty Ronda asked if any of the women were stolen and would they please stand. Five women stood up, the youngest being only 50. Aunty Rhonda then asked if anyone whose mother or grandmother was stolen, could they please stand. Except for six women, everyone in the room stood up. It is hard to express on paper the amount of compassion and love that was in the room between both the Indigenous and non-Indigenous women.

I think having a visual representation of how fresh the stolen generation is, and how much it impacts Indigenous people today, was an eye-opening experience for everyone and goes to show why reconciliation is so vital for Australia.

Other memorable moments
One of the highlights for me was meeting Danny Glover. When Christine Ross announced that Danny Glover was at the conference many of the older women in the room rushed out of the auditorium to find him. I, and a few other millennials, had to turn to technology to Google him. Once we had worked out who Danny was, we were keen to hear him speak about the impact his mother had on him. Talking to a few of the elders at the conference I learnt why Danny was so significant. Danny was one of first of the First Nation’s peoples to make it onto the Hollywood scene. His continual support and activeness within the reconciliation space globally has given strength to many more First Nation people.

Wednesday night’s Gala Dinner was held at Royal Randwick Racecourse, and was open to all conference attendees, sponsors and members of the public. At the dinner they exhibited the First Nations Fashion Show. I was amazed at the garments that came out. We also had the Merinda’s perform a Motown show based on the Sapphires. It didn’t take long for the two women to get everyone up and dancing!

Overall, the experience has had a huge impact on me and I am so thankful to Curtin University for allowing me to continue to grow both personally and professionally.